Lock and Key (Male) by Kevin "WAK" Williams is a black and white depiction of a nude black man kneeling and offering a key.

Lock and Key (Male) by Kevin "WAK" Williams is a black and white depiction of a nude black man kneeling and offering a key.

Other top rated products
Powered by
5.0 star rating 5.0 12 Reviews
0 Questions \ 0 Answers
ask a question
write a review
ask a question
write a review
You are connected as
-OR-
Thank you for posting a review!
We value your input. Share your review so everyone else can enjoy it too.
share
share
share
Thank you for posting a review!
Your review was sent successfully and is now waiting for our staff to publish it.
Thank you for posting a question!
Please click on the link in the confirmation email we just sent you to submit your question.
Your question will appear on the site once someone answers it.
See what people are saying about
Loading...
write a review
ask a question
Updating Results
Verified Reviewer
What is a Verified Reviewer
A Verified Reviewer is a shopper who has confirmed an email address, or connected a social network with Yotpo, providing an added level of transparency and trust.
0 star rating
On
Verified Buyer
What is a Verified Buyer
A Verified Buyer is a user who has purchased the reviewed product through our store.
5 star rating
Loved it
Loved it 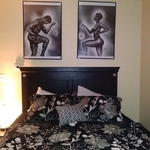