Hubert Jackson and his Spirits of the Journey series documents and preserves
the lives and ancestry of Black People during the Civil War. 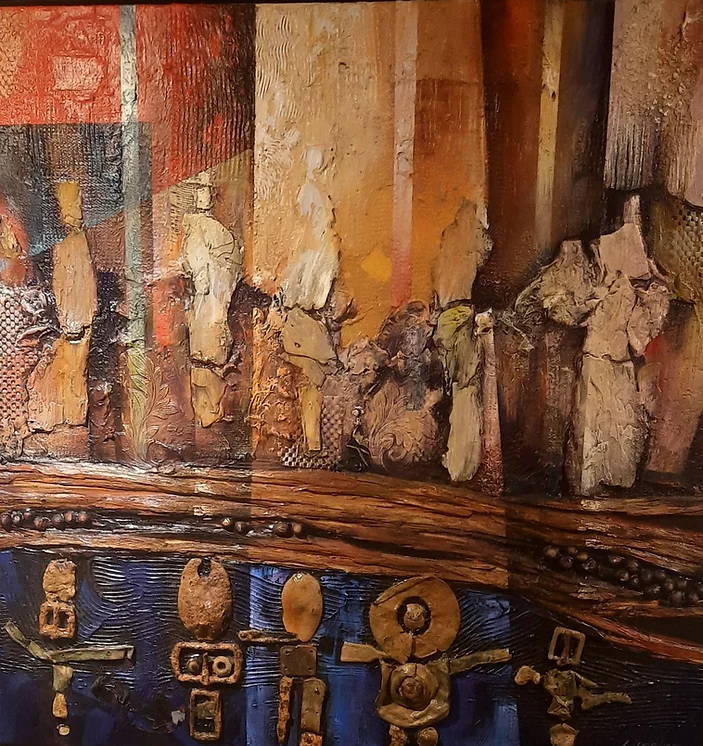 The idea of Blackness and its inherent right to exist is not something that comes from law or statute or is endowed onto a people by a nation-state. Focusing on the right to exist is the crux of the argument Black folks have fought for while in the United States of America. Blackness has always had an ancestral connection point that allows those endowed to access an entity that can not be granted or taken away by one person or group.

This type of connectedness and grounding is essential to a kind of survival of Blackness.

Acclaimed artist Hubert Jackson traffics in this space of spiritual ancestry – channeling and exploring the areas that Black folks lived and fought for in the name of existence. "Some of my recent work deals with the period of American history from its inception throughout the Civil War and, in particular, the spirits of those who have come and gone but remain anonymous and unaccounted for through war, slavery, poverty, or the passage of time, Jackson says in the Zenith Gallery art catalog.

"Although they are no longer physically present, their spirits remain with us as they have become one with nature – embodied within the life forms that emerge from the earth."

The resiliency in heritage that Jackson alludes to derives from the earth and universe itself and isn't created or destroyed. Through his art – specifically through his Spirits of the Journey series, Jackson looks to the spiritual remains of the Black soldiers of the Civil War to discern for himself and others what they were fighting for.

Understanding the civil war takes years of copious study, as time and some who employ obfuscation and offer alternate and misguided rationale for the war have complicated the research.

Jackson has decided to center and focus his sights on the specifics of the United States Colored Troops – the predecessors of what will come to be known as the Buffalo Soldiers – and the Black men and women who served the Union Army during the “War Between the States.”

Jackson then, was able to channel one of the Union’s most surprising and influential characters: Charlie Wright.

Wright, an enslaved Black man who escaped from Culpeper Court House in Virginia might have one of the most under-told stories of the civil war.

In his impression of Wright, Jackson, a Culpeper native, worked to capture his complexities. The work centers on Wright and the land he is from – by combining the two and allowing one to bridge into the other.

The implementation of contrasting oranges, reds, and yellows – magnified by the heavy layering of acrylic – with the blues and whites brings Wright's figure into focus. The geometric coloring of Wright's face – using the same contrasting palette – highlights the stoicism and allows for regality as the lower half of his body is formed into the terrain playing off of his ephemeral existence. According to Jackson, this terrain was created by using the pine and cedar tree bark he collected from multiple areas surrounding Culpeper.

A white "light" surrounding his essence furthers the idea that it isn't only portraiture but a capturing of Wright's spirit.

There is a seriousness to the painting as it connotes the gravity of the situation presented to Wright and the Black folks who were enslaved and fighting on behalf of the Union and themselves.

Wright did not come into contact with Union soldiers in June 1863 in Virginia as a man or as a soldier; he was enslaved property; contraband as he and many other escaped Black people were referred to at the time.

Yet his extensive knowledge of General Robert E. Lee's military units and movements proved valuable to Union captain John McEntee of the Bureau of Military Information. This was evident in the telegraph from June 12th, 1863.

"A contraband captured last Tuesday states that he had been living at Culpeper C. H. for some time past. Saw Ewells Corps passing through that place destined for the Valley and Maryland. That Ewells Corps has passed the day previous to the fight and that Longstreet was .... coming up."

After Wright's information was confirmed, this "convinced General Hooker of Wright's assertion that Lee's army was moving into Maryland [and] Hooker ordered his army to shadow the Confederate forces' movements while traveling on the eastern side of the Blue Ridge Mountains out of view of Lee's troops." 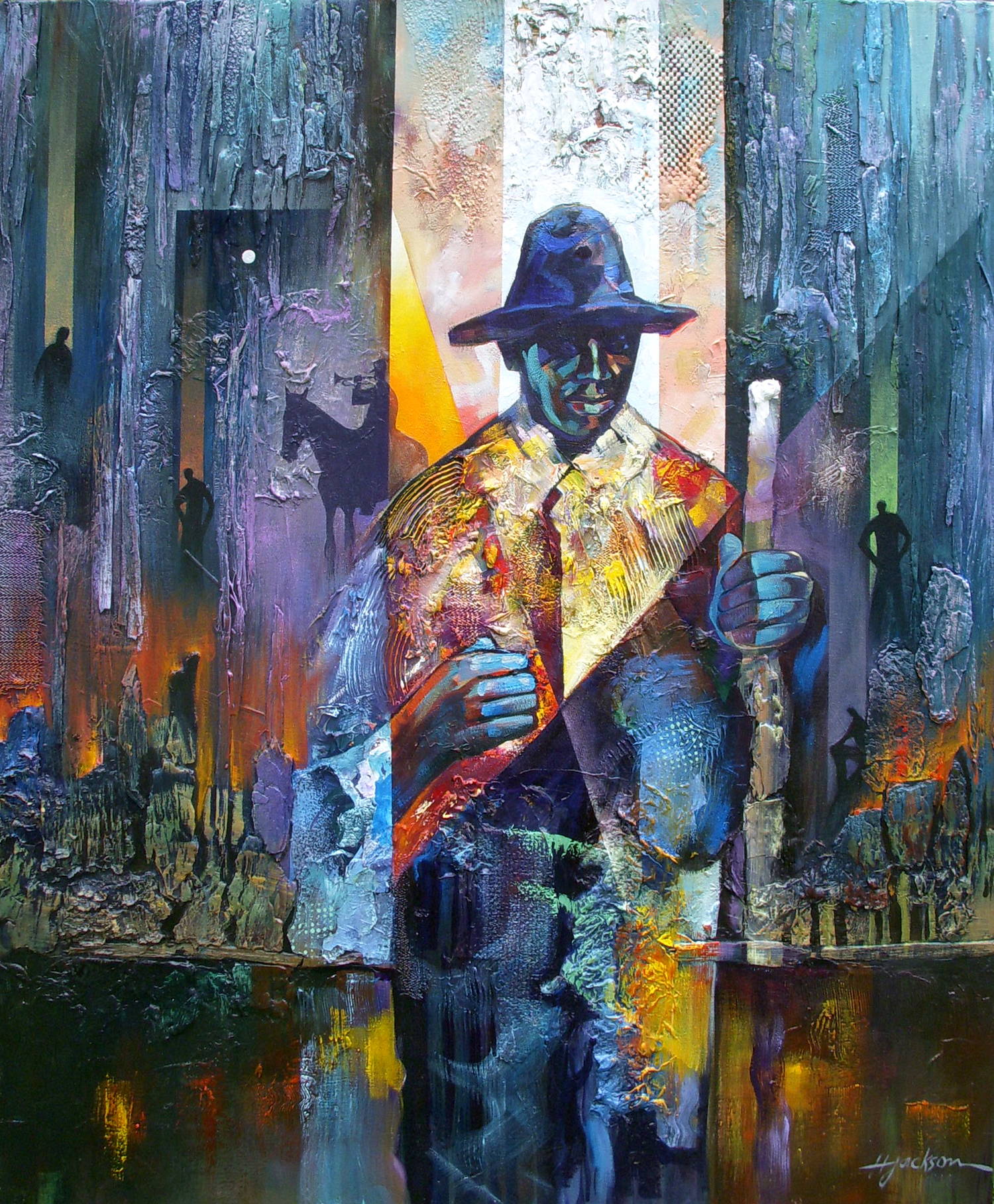 Charlie Wright, The Runaway Slave Who Saved the Union, Hubert Jackson, 2013
(Courtesy of the artist and Zenith Gallery)

Wright's information led General Hooker to make the move that allowed the Union soldiers to create an advantage upon arriving at Gettysburg and ultimately winning what many believe to be the most decisive battle of the war.

"It is unknown what happened to Charlie Wright after the war ended," Jackson acknowledged to Zenith Gallery. "For my depiction of him, I used a photo of a family friend from Culpeper, Virginia named Charlie Wright as a model."

In the portrait of Wright, in various spots in the background are the shadows and spirits of Black soldiers and enslaved Black people affected by what Wright had contributed to the struggle.

Their and Wright's ascension into another plane of existence allowed for the continued perseverance of Black people for centuries after the war.

The Spirits of Culpeper, in its use of tree bark, coat clips, and ball bullets that Jackson collected from various battlegrounds in Virginia, illustrates the spirits and lives that called the area home and a battlefield with the Union Army.

Jackson finds that the artifacts that he procures are connected to the heritage of Culpeper, and his use of them in his painting connects him and the viewer. The items that were lost and overlooked actually re-center the struggle and sacrifice of Black soldiers.

"Much of my work is characterized by the symbolic use of pine bark figures to represent spirits of long-forgotten ancestors," continued Jackson in the Zenith gallery catalog. "The very nature of pine [b]ark – its shape and textures – appears to suggest human forms, especially bark from old-growth trees.

I feel that by juxtaposing these limbless entities over and about recognizable human figures and scenes, I am connecting with and validating the existence of those whose shoulders we stand on."

Through this work, the spiritual nature of Blackness and its struggle for recognition – historically and contemporarily – is felt. Something can be said for operating in a space where the heritage of a people can be preserved by looking beyond the physical existence of bodies and understanding the survival of Blackness goes deeper.

Through Jackson's art, the struggle for Blackness is more than a right to citizenship, but a divinely endowed right to existence. 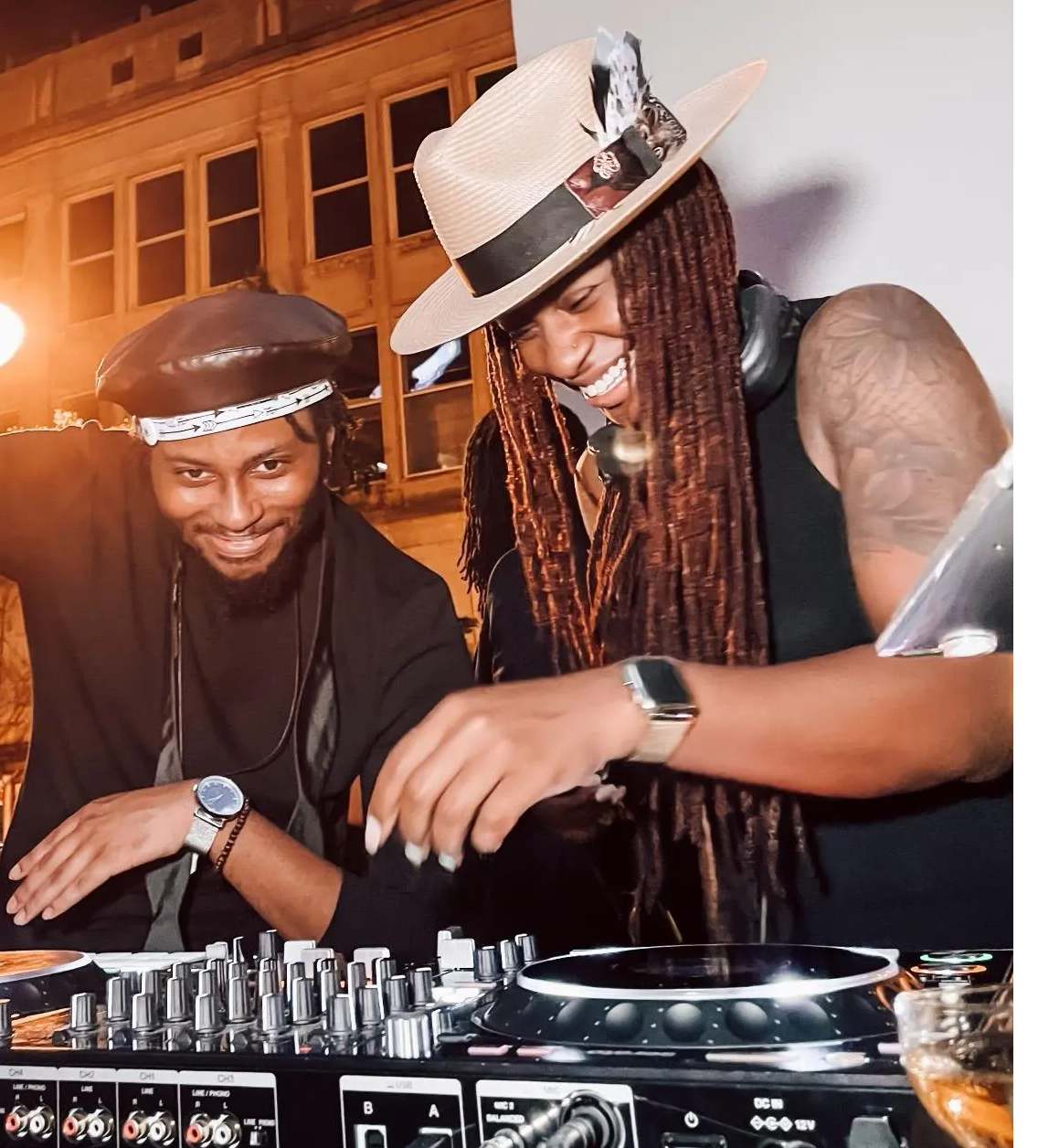 Daniel Richardson is from Southwest, GA which makes him Southern, but not country. He has lived in Atlanta for nearly a decade where he attended and graduated from Atlanta Metropolitan State College and Georgia State University where he completed an undergraduate degree in Journalism.

To Daniel, art gives him the ability to study the stories of the Black experience and explore it more fully.